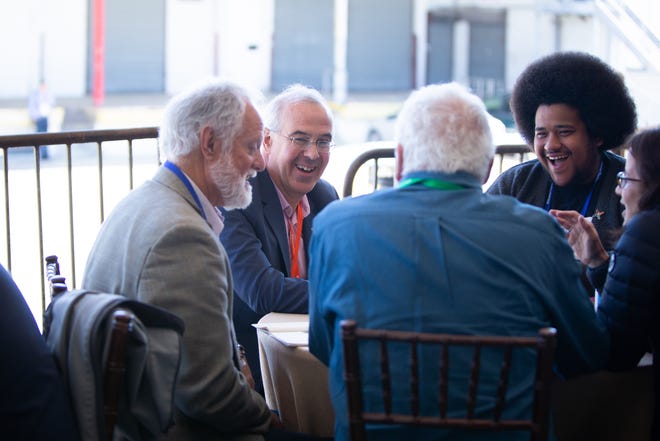 Feeling a little depressed by our collective mood? Me too. Everywhere I look people are fighting for something. Schools. Abortion. Race. And it’s not just political battles over political issues. These are often bitter, dirty wars of tribal fury, where the fight itself is what matters.

But look beyond the haze of uninterrupted political struggle, and a more hopeful story emerges.

All across Wisconsin, people are weaving their communities.

Maybe it’s the neighborhood captain watching his block. Or the muralist who invites the community to help plan his public art and then paint it. Or the cafe on the south side run by school children where youngsters discover a business and you get delicious coffee.

These weavers strengthen their communities. We intend to tell their stories over the coming months.

We borrow this idea from the Aspen Institute, a global non-profit organization headquartered in Washington, DC. In 2018, he launched Weave: The Social Fabric Project to address the problem of broken social trust that has left Americans divided on many lines. Aspen works to find weavers, tells their stories, and offers them support and connection. Aspen, founded in 1949, has worked for years on some of the toughest challenges facing the United States. She is perhaps best known for the Aspen Ideas Festival in Aspen, Colorado, where thinkers, artists, writers, business people and teachers gather each year.

Our Wisconsin Weaver project will do some of this same work. And maybe we can push others, as Weave founder David Brooks would say, “to show up, way up there.”

We’ll tell you about a program at La Crosse to confront racism that has created an ecosystem of care around this devilishly difficult problem.

We’re going to tell you about an Appleton woman who became an advocate for those affected by drug addiction after her daughter died of a heroin overdose.

You’ll read about Lorraine Shooter, who is the founder of Menominees Against Dope at Neopit, a group that focuses on drug addiction and missing and murdered Indigenous people in Wisconsin’s homelands.

And we will report on an effort in Milwaukee to reclaim and preserve the history of Milwaukee’s Bronzeville neighborhood.

We also want to hear your stories. You can nominate a weaver using the form below. Who do people turn to in your neighborhood? Who do we trust the most? Who is the person who steps in to help – who goes beyond the call?

We need more weavers because in some important ways the nation is broken.

Brooks, the New York Times columnist and author, has become increasingly concerned about social disconnect. His speech last October at the University of Wisconsin-Madison LaFollette School of Public Affairs made a deep impression on me.

Although we have more ways to connect than ever before in human history, we’ve become more disconnected, says Brooks. For many people, this has led to loneliness and isolation or left them blind to other people’s problems. There is an ugly tendency to dehumanize one another in thoughtless and petty ways.

In his Madison speech, Brooks cited some chilling statistics.

These are signs of a serious social breakdown, fueled by a chronic lack of trust. A lack of trust in institutions such as politicians, the media, churches and civic groups – and a lack of trust in each other. Our ugly political fights are a symptom of this larger societal problem, Brooks believes.

“That seemed to be the underlying issue to our other issues, and it seemed to be a general cultural issue and a social issue — not just a political issue,” Brooks told me.

“But the second thing that came to mind is that the problem is solved by local weavers in every city in the country.

“We would just go into a neighborhood and say, ‘Who’s trusted here’, and people often come up with the same names. People knew who the trusted people were.”

Weavers change their communities, little by little, often just by showing up.

“The theory, which I’ve stolen from a million cultural movements, is that culture changes when a small group of people find a better way to live and the rest of us kinda copy them,” he said. Brooks.

Frederick J. Riley says his life was saved by people like that. Riley, who grew up in Saginaw, Michigan, is Weave’s executive director.

“I’m living a life that I’m not statistically supposed to be living,” he said. “I go places I’m not statistically supposed to go because of my birthright. I grew up in projects. I only met my father when I was 11 years old. My mother was in public care most of my life, and I saw most of the young people – most of the men around me – end up going to prison, getting into gangs.

But Riley got help from people like her fifth-grade teacher, her high school English teacher, her childhood pastor — all of whom saw her potential. “They put this scarf together, which is me, and now I can help people in communities who do this work every day.”

The Aspen Weave project that Riley now leads, after his many years with the YMCA organization, does three things. It connects and supports weavers, sharing tools, resources and providing an online gathering space for the Weave community. It amplifies the stories of the weavers to elevate them as leaders of community change. And it’s working to inspire more people, especially the next generation, to become community weavers.

Riley thinks weavers are doing more than solving current problems, and a 2017 study in Columbus, Ohio seems to confirm this. The Columbus Trust study found a link between trust and community engagement. According to the study, a majority of people who said “most people can be trusted” said they had volunteered with a nonprofit, civic or religious organization in a typical month and had volunteer more of their time than less confident people.

Almost all have a moral motivation. “They need to feel good with the world.”

In many cases, their service may be born out of a traumatic experience in their life.

They have great social skills.

About half the time there is a religious and denominational component.

They work hyper-locally. “The ones I love the most have worked in the neighborhood where they live,” Brooks said. “They know the problem. … The community is the expert.

“They knew why they had been put on this Earth”

When I asked Brooks how concerned we should be with the growing social disconnect, he replied, “I think very.

“What I’m obsessed with these days…is a spiritual or moral story that could be told. …We already had hard times during the Depression, but we didn’t have an increase in suicide and depression. We had the war, we had all kinds of things.”

But compared to 40 or 50 years ago, we have ‘fewer politicians who can hold the centre, we have a lot more emotional fragility, and so for me it stems from a sort of change in the moral climate’ .

“We have a narcissism that says I’m really self-obsessed, but I’m also very insecure, so I have to lash out because I’m always under threat.”

When he talks to the weavers, however, he has hope.

“In the three years leading up to COVID, everyone was depressed about the political decadence and all that. I was having a great time traveling around the country – Nebraska, Wisconsin, Louisiana – and meeting and hanging out with these people. It was just great fun. And I’ve never met one who said to me, “I’m going to do this for a few years and then I’ll go back to selling cars.” They knew why they had been put on this Earth.

In every village, town and city in Wisconsin, people like this are making a difference.

We plan to tell some of their stories. We invite you to tell them too.

And maybe that way we can build stronger bonds that will benefit everyone.

David D. Haynes is editor of the Ideas Lab. Email: [email protected] Follow him on Twitter at @DavidDHaynes