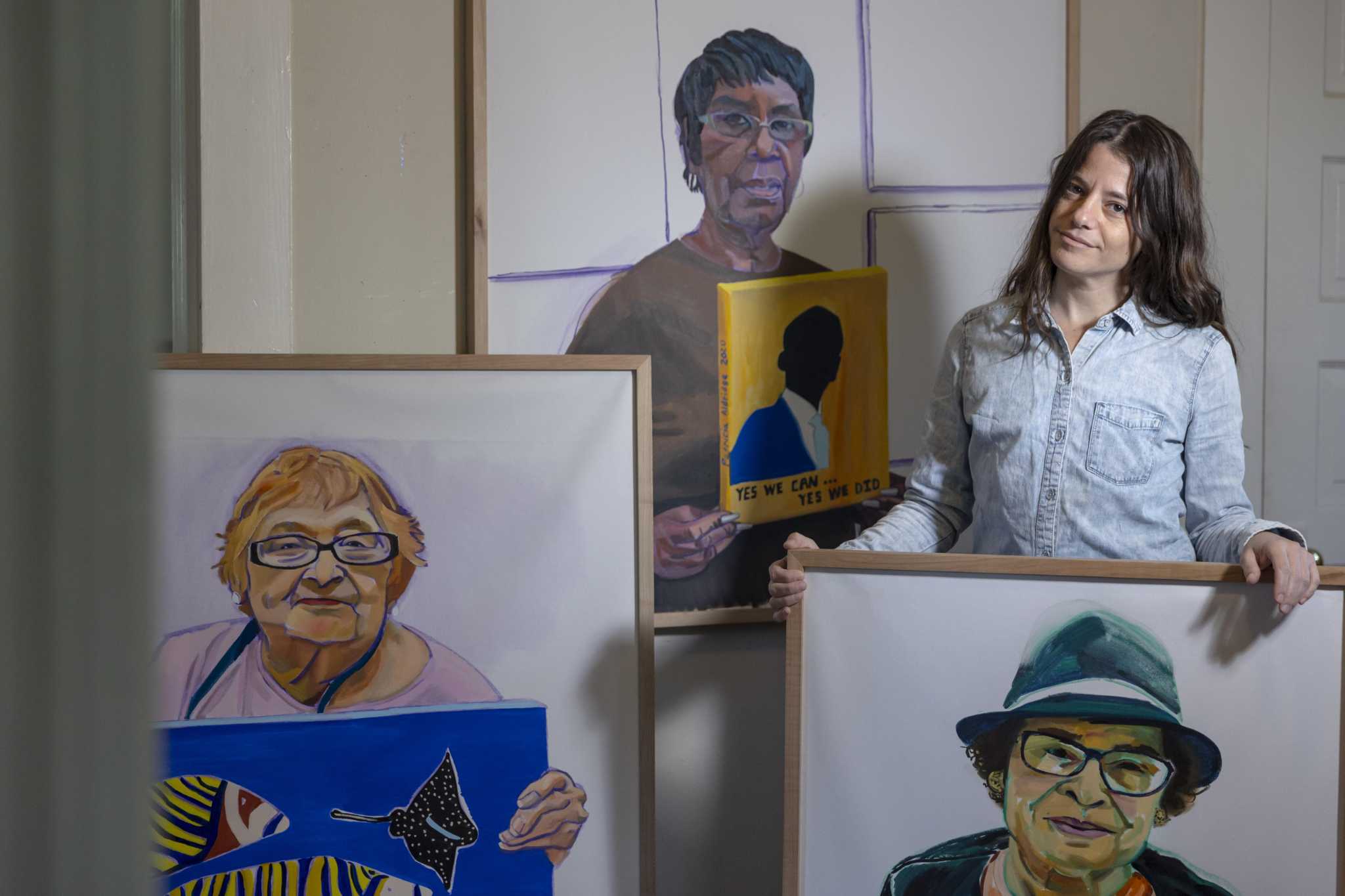 SAN ANTONIO — Entering Gabbe Grodin’s house is like entering an art gallery. Pinned to the walls of his apartment studio are larger-than-life paintings of elderly women who were students in his free art classes at local senior centers.

Bold brushstrokes emphasize their character. The color contrast makes the images real and accessible. A quiet pride is reflected in their eyes.

Amada Treviño holds her painting of “Corazon de Condominio”, a red heart with valves growing above yellow windows and a door. Barbara Burnette shares her depiction of a blue jay hovering over sunflowers against a pink background. And Vivian Martinez grabs her painting of striped fish and manta rays under the sea. Martinez, since deceased, reminded Grodin of her bubbleYiddish for grandma.

“I try to show them how beautiful they are,” Grodin, 41, said as his cat, Myrtle, curled up in his lap at his home near downtown. “I think a lot of people have been left out. You can hear them talk about being inconsiderate by the buzzing world around them. I try to respect their autonomy.

On ExpressNews.com: ‘It’s a beacon of hope’: Domestic violence survivor empowers herself by helping others

The oil paintings are part of Grodin’s “WOW: Wonderful Old Women” exhibition which was presented this summer at the Bihl Haus Arts Gallery. On his website, Grodin said the 14 portraits are of “often overlooked and underappreciated” students. The artist and educator said the exhibit seeks to reject negative stereotypes of the women it depicts holding their paintings with dignity.

Grodin chose the women from student photos she collected over the past seven years. She was inspired by the book “Wonderful Old Women”, with interviews conducted by Bonnie Lyons, professor of English at the University of Texas at San Antonio. Lyons and Deb Fields did the editing, with photos by Linda Harris. The book features 13 women, aged 80 to 97, sharing stories about their life’s journey and how they see themselves.

The exhibit featured “My Matrilineage”, 58 women – such as Michelle Obama, Barbara Streisand and Xena the Warrior Princess – on a single canvas. The 60-inch by 48-inch room occupies one wall in Grodin’s house. The painting, made at the start of the pandemic shutdown, pays tribute to his mother, art teachers, aunts, grandmothers, sisters and role models.

The “Quilt of Faces” gaze never wavers near the squeezed tubes of oil paint and the palette knives on her worktable. Jars of gesso, linseed oil, and mineral spirits shared the space with jars of tools and brushes on metal shelves.

Grodin said his art is like keeping a journal of his personal life. Artistic expression has always been part of his life.

“I’ve been lucky along the way to have others nurture my interests,” Grodin said, “and in return, I’ve enjoyed nurturing the artist in others.”

In 2004, Grodin earned a Bachelor of Fine Arts with a concentration in painting from Indiana University. Seven years later, she earned her MFA from Rutgers University.

A 22-year Air Force veteran, Vincent T. Davis embarked on a second career as a journalist and found his calling. By observing and listening to San Antonio, he finds intriguing stories to tell about ordinary people. He shares his stories with Express-News subscribers every Monday morning.

An art teacher for 15 years, Grodin has worked in New York for various art institutions and taught a painting class at Rutgers.

She said affordability, public support and opportunity influenced her decision to move to San Antonio. She remembers arriving with no intended job, but thriving in the city. Grodin has taught at local nonprofit arts organizations, including the Barshop Jewish Community Center of San Antonio and Spare Parts. She is currently at the Faculty of Visual Arts at Bihl Haus.

Before starting a project, Grodin finds comfort in watching his favorite TV show, “Star Trek,” and its incarnations — all in tune with his idealism for a better world.

During her 12-week course, Grodin emphasized that art is for everyone. She encouraged students to bring personal photos, photos of people they love — things that can dig into personal stories. And when they needed inspiration, the artist kindly suggested that they look in a mirror.

Patricia Aldridge, 75, is one of the students Grodin painted from the Southside Lions Senior Center. The artist depicted Aldridge holding his yellow painting with the silhouette of President Barack Obama above the words: “Yes We can. …Yes.”

Women bonded amid brushes and canvases. Experienced students helped classmates who were not so competent. Those who were home alone found company, a smile and a conversation. They found someone who would call them and watch them.

“It’s just amazing that we as elders, many of us, are becoming so proficient in painting,” Aldridge said. “It brought us joy. He is a great talent and an excellent teacher. She is patient. That’s what it takes — her patience is to be commended. Diligence must be something she enjoys.

Grodin said San Antonio has a strong network of senior centers that offer free art classes by local artists unique to the city.

“There are a lot of magical moments in the classroom where students surprise themselves with their built-in ability,” she said.