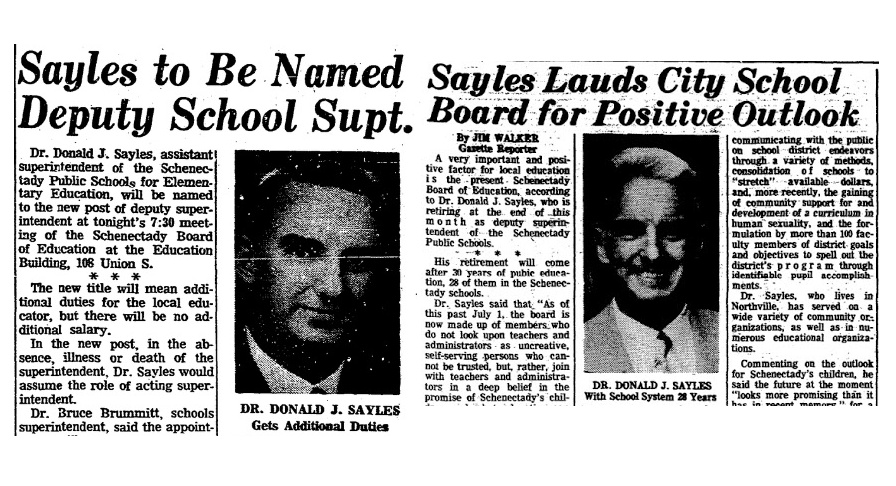 After reading Donald Sayles’ obituary in the Gazette earlier this week, I came to the conclusion that he must be a great guy. Then I took a closer look, chatted with a few people, and found I was right.

Ensure access to everything we do, today and every day, check out our subscription page to DailyGazette.com/Subscribe

Of course, I already knew something about the man, a longtime deputy superintendent of the Schenectady School District who passed away earlier this month at the age of 97. I’ve had lunch with his son, Doug, a few times, and I’ve interviewed his other son, filmmaker John Sayles, twice. I knew his wife, and although Mary Sayles was not one of my teachers at Pashley Elementary School in the BH-BL district, I remember that she was very popular with many of my friends who were in his class. Schenectady County District Attorney Robert Carney, a classmate of mine, had Ms. Sayles for fifth grade and told me earlier this week, â€œI loved her. My favorite teacher of all time. Marie died in 2011.

So when I spoke with two longtime officials from the Schenectady Town School District and asked them about Sayles, they confirmed what I thought I knew. Sayles was something special.

But before I share what Jesse Robinson and Ray Colucciello said about Sayles, let me tell you a little bit more about this man.

He was born in Oneida in central New York, raised in the Woodlawn area of â€‹â€‹Schenectady, and graduated from Mount Pleasant High School in 1941. Before he could complete his college education at the University of Albany Sayles spent more than two years as a member of the US Army Military Police in Italy and North Africa.

Upon returning to the United States after the war, Sayles completed his studies at UAlbany and received his Masters and Doctorate degrees in Education from Columbia University. He taught in Willsboro near Lake Champlain for two years, then returned home in 1950 and began teaching math and science at Nott Terrace High School.

In less than four years, he was appointed assistant principal of Mont Pleasant High School and eventually became principal. For the last 16 years of a 30-year career in education, he has served as Deputy Superintendent, working closely with Chuck Abba to ensure the city’s children receive the best possible education.

“He and Chuck Abba hired me away from Scotia to open Woodlawn [Elementary School] in 1972, â€said Colucciello, who also had a long career in school administration, most notably as acting superintendent for nine different districts in the capital region. â€œDon loved to be involved with new ideas and he brought a lot to our school district. He was a forward-looking guy, a really smart guy and a quintessential writer. He wrote and wrote and wrote. We used to joke that two months after his retirement his secretary was still typing his material. “

Colucciello said Sayles could have sent his two boys to a suburban school, but chose to keep them in the Schenectady neighborhood.

â€œThey were both good athletes and they could have gone to a suburban school, but he wanted them to be part of an urban setting,â€ Colucciello said. â€œDiversity was something he always embraced. Don’s blood flowed through the city’s school district, and he wanted all children to have the best opportunities and the best education possible. He wanted our children to have all the opportunities that suburban children had. “

Sayles’ desire for diversity was something Jesse Robinson learned firsthand when Sayles hired him in 1966 to teach at Lincoln Elementary School.

â€œI had my first job interview with him, he hired me and we ended up being good friends, skiing and snowmobiling,â€ said Robinson, one of the first black teachers. of the city’s school district. â€œHe was a very down to earth guy and he didn’t do anything for political reasons. He made decisions for the right reasons. He never felt any pressure from the outside. He was a great guy.

Don Sayles will be buried in Solomon National Cemetery in a private ceremony. I’ve never met him, but I’ve read some of his writing – his letters to the editor and some history columns he wrote for former county historian and Gazette reporter Larry Hart – and I can say with force that I felt like I knew him, and loved him very much.

Ensure access to everything we do, today and every day, check out our subscription page to DailyGazette.com/Subscribe

More from The Daily Gazette: