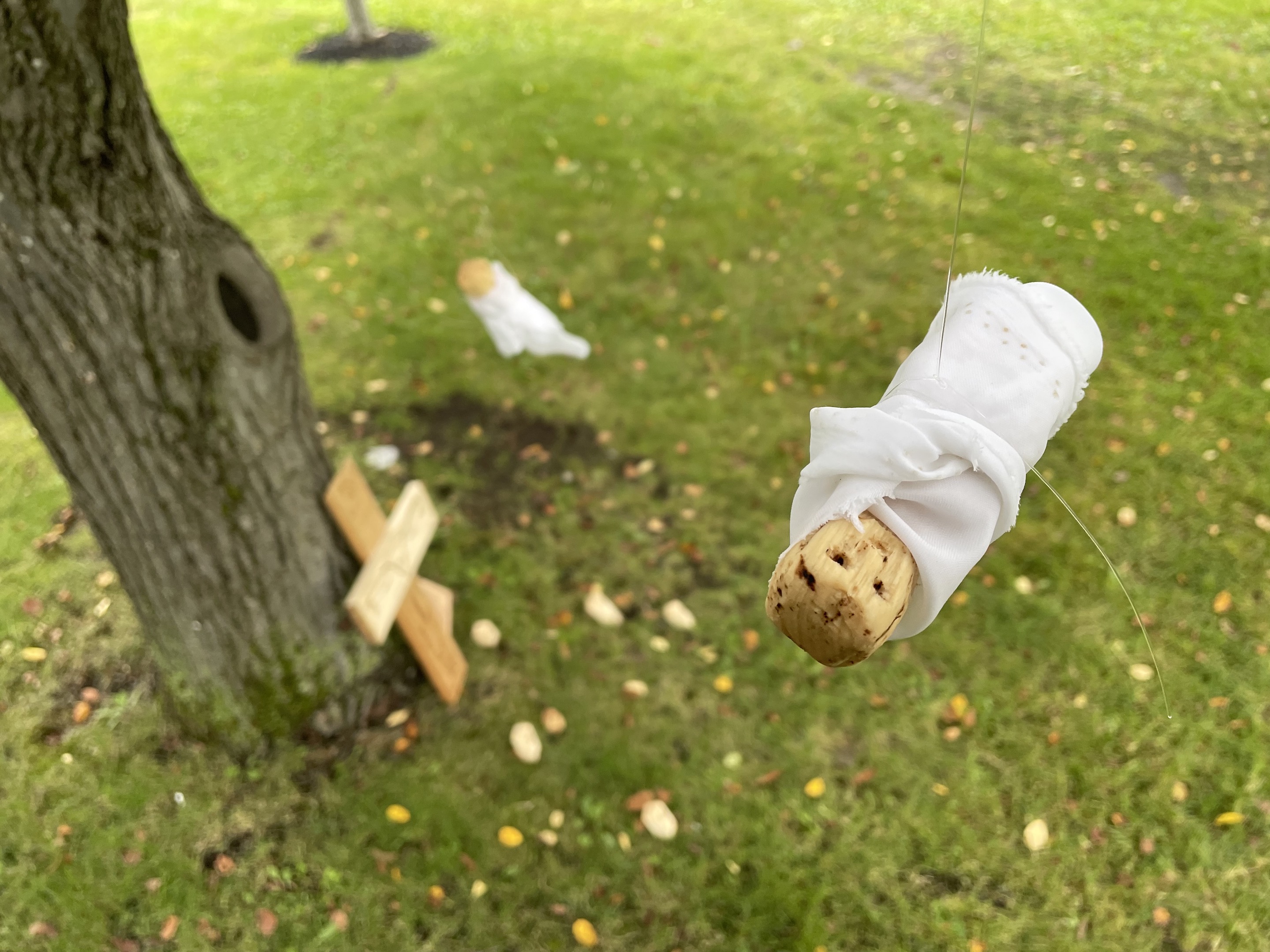 On Monday morning, a controversial art installation was displayed on the chapel lawn facing the polar bear statue. The room has sparked controversy, and despite the presence of security around the room on Monday, it was vandalized on Tuesday evening.

The artwork, a student project for Installation Art, a seminar in the visual arts department, depicts a wooden cross with messages relating to abortion rights. Above the cross reads “God’s Body God’s Choice” and carved into the wood is an image of a womb with the caption “1973-2022”. Figurines for babies hang around the cross from the branches of the tree, and at the foot of the tree, a small bulletin board on which one can read “the mother [sic] that have never been” decorated with scattered mini tombstones of “RIP Mom” with various years engraved on each.

Some students found the message of the art confusing.

“I think there’s a place for art and religion and all those things; it was just shocking to me personally,” Izzy Miller ’23 said. “It first seemed like it…was done as an act of threat or hate…so there was some relief when it was clarified that was not the situation, but I don’t think that negates the fact that it looked like [it was done by] the street preacher who came to Bowdoin and once harassed students.

Other students questioned the artist’s intent, coupled with the reaction his piece garnered in the campus community.

“It’s supposed to be provocative for Bowdoin students to reevaluate how they feel, but in the same way it’s so ambiguous…and at the same time, is that really the way to go?” says Chloë Raines ’23.

The Orient received a copy of the artist’s statement provided by the work’s original creator, Sophia Rosati ’24, who set up the exhibit as a project for her 3000-level seminar taught by the Visiting Assistant Professor of Art Audrey Shakespear. Rosati listed her hopes and intentions in creating the artwork, which she described as a “pro-choice artwork” and a “memorial to the death of Roe v. Wade.”

“The work, like the title, is a support for the conjunction of Christian ideology with feminist ideology, representing the inextricable links between the two,” Rosati wrote in the statement. “Discordant images, such as a large cross, babies and tombstones, all placed next to the non-denominational campus chapel, are used to evoke an innate shock in the viewer. My goal with this art is to force us to overcome this discomfort.

Rosati’s statement also shed light on her intention to create an art project with the aim of “deconstructing the common ignorance that we share as students of Bowdoin”.

“When we encounter things that go beyond the limits of our Bowdoin bubble, how do we react? How can we interpret something we expect to disagree with, without bias? This piece forces Bowdoin students to look beyond our initial judgments,” Rosati wrote.

According to Rosati, the response from the community indicated the need for the very dialogue that her art strives to create. She mentioned having had to file numerous reports of vandalism and theft against her project. The College Safety Report documented one instance where the art was “tampered with and vandalized.”

“The response I saw from campus just fulfilled the point of my artist statement, which is that it can be incredibly difficult for all of us to separate our preconceptions from our analysis as we dig deeper,” Rosati wrote. in an e-mail to the East. “I appreciate classes that have discussed my work in depth, but I urge people to continue to digest and accept my artist statement and appreciate my art for what it was: art. “

On Tuesday, the class held a discussion section, open to the public, where attendees were able to discuss the impact of the student facilities. However, few people from the public were present.

“I think a lot of harm could have been mitigated by a statement released immediately,” Miller said. “I think it’s complicated, right? There is a place for all of this dialogue and I don’t want to come across as someone who is against art[…ButIthinkit’sreallyimportantthatweasacampuscommunitytalkaboutthefactthattheworktheyorwewerewaslookedlikeanactofhate[…ButIthinkit’sreallyimportantthatweasacampuscommunitytalkaboutthefactthatthepiecewhetherornotitwaslookedlikeanactofhated”[…Maisjepensequ’ilestvraimentimportantquenousentantquecommunautéducampusparlionsdufaitquel’œuvrequ’ellesoitounonétaitressemblaitàunactedehaine[…ButIthinkit’sreallyimportantthatweasacampuscommunitytalkaboutthefactthatthepiecewhetherornotitwaslookedlikeanactofhatred”