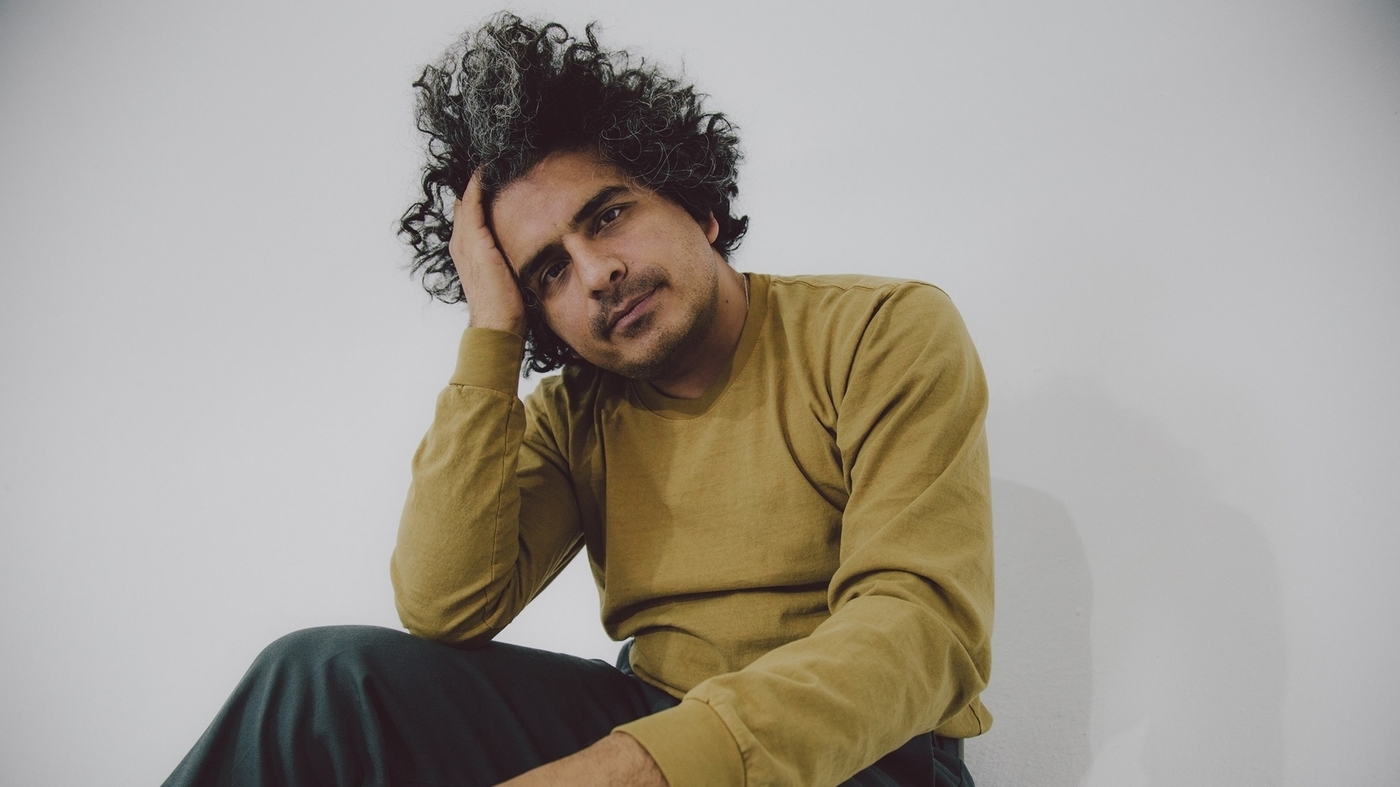 “The way I talk and think about sound and music is to think about shapes, colors and textures,” Helado Negro told NPR. “It is, as much as it is musical, a bit like a language.”

“The way I talk and think about sound and music is to think about shapes, colors and textures,” Helado Negro told NPR. “It is, as much as it is musical, a bit like a language.”

Working under the moniker Helado Negro, the Ecuadorian-American artist has skillfully evolved between genre and medium, creating everything from albums steeped in electronica tinged with downtempo Spanish house and folk, to meditative sound art installations. His category-defying work spans over a decade, with his kaleidoscopic view of the world gaining critical acclaim along the way.

His seventh full album, Far in, released on October 22. This is his first release on independent label 4AD, and finding a place alongside the label’s non-compliant independent giants makes perfect sense for Lange; her work is both ever-expanding and intimate, gesturing out into the cosmos while making sure you don’t miss the little things. The album’s “There Must Be A Song Like You” is a mesmerizing statement of confidence over a prominent bassline, and throughout the record, Lange muse in Spanish, doing it on wind chimes and Wurlitzer chords. on “Aguas Frías” and in a voice worthy of a lullaby. whispers on “Agosto”.

A graduate of Savannah College of Art and Design, Lange and his partner, artist Kristi Sword, last year organized a multimedia collaboration in the mediums of sound and sculpture titled Symphony Kite in Marfa. While there, Lange experienced both nature and art from a different perspective, stimulated by the confines of Lockdown. His new songs are inspired by this perspective, as well as Lange’s continued desire to create an entirely new world in his music. Far in is a visit to an unexplored universe and a love letter to openness, both to the soul and to the natural world. Through the fifteen songs on the album, Helado Negro warmly extends an inviting hand to the outside, inviting listeners to come and vibrate at his side. Where are the 2019 This is how you smile looked inside, making his voice the only ‘protagonist’, Far in favors a welcoming ambient groove.

Speaking to NPR, Lange explains how the vast Marfa Desert, Texas, inspired Far in, creating his own sound vocabularies and the fragile boundaries between voice and sound.

This interview has been edited for length and clarity.

Reanna Cruz: You have a new album coming out Far in. Where does the inspiration for this album come from?

Roberto Carlos Lange: I didn’t know I was going to make an album until last year. When I found myself deciding to make a record, I realized that I had a lot of work that I had already worked on. The week I finished my last record [2019’s This Is How You Smile], I had started to record a bunch of songs. It was cool to have all these ideas already there, blossoming, waiting to be used as something.

I was in Marfa, Texas last year and it was a good time to take stock [of] what I was doing, working on an album and being in another place, not being home and kind of being disconnected. It helped navigate and guide everything.

Marfa is specifically a city of art, and I know you have roots in the art world. How did this city and your experiences in Marfa impact the record?

It had a huge impact because we were there to work on a piece called Symphony Kite, my partner [artist Kristi Sword] and me. We were commissioned by [the arts space] Ballroom Marfa, so we were already there with the mindset of working on this collaborative thing. It was really a fruitful time because we were together all the time, and we could only be together all the time because of the pandemic. But it was also the first time that we had collaborated on something from the ground up, and that’s rare.

Marfa in itself is exciting because it’s in the middle of the desert, and it’s that alien landscape that I had never really been exposed to. It’s a bit violent, it’s scary. If you drive just an hour from the city, you are in the middle of nowhere. I got to see how inspiring it really is for a lot of visual artists in particular, because it’s so vast and there’s so much room for your mind and imagination to fill those spaces, instead of be in town.

In Brooklyn, every nook and cranny is sort of filled. Everywhere you walk, the sidewalk is filled with something, or there is something on the side of the street, or there is a building full of people. There are so many interactions with so many nuances in the big cities that it’s like the antithesis of a place like the desert. They are both full of this beautiful energy, just in a completely different way.

What particularly interests me is your relationship with the art world, both through your academic career and your work within it. What impact does this have on your music?

Each time, I just try to create something that is my own world. It’s not that I’m trying to hyper-conceptualize something where you have to have this deep concept to exist, you know? But I think in terms of the way I do things, I don’t have a very traditional musical background or, in a sense, a musical vocabulary. I don’t really read or write music, but I think the vocabulary I have comes from visual arts education. The way I talk and think about sound and music is to think about things like shapes and colors and textures, and things that are bright, soft and delicate. It is, as much as it is musical, a bit like a language.

And do you feel more comfortable creating soundscapes rather than traditional compositions? Or is it some kind of balance?

I think it’s all the same. Songs are sound art, words are only sounds. I don’t think there is a separation, honestly.

The record sounds less folk than your previous records. Was there a change in instrumentation that you wanted?

What I did intentionally was I tried to emphasize the drums and bass as the protagonist [much as] my voice has been in the past. In the last album, my voice was the thing that was up front and kind of a solo – it was its own world. The drums on the last album and other aspects of the rhythm were really blurry. They looked more like a hazy feeling. This record, I think the grooves are heavier and they’re just more prominent.

I’m really bad with gender tags. So I don’t really feel like a lot has changed other than the things that I tried to put [it] in perspective. The last disc is very synthesized and very loaded with atmosphere. There’s a lot of acoustic guitar in there, but it doesn’t really sound like a folk record, you know?

Were you listening to anything specific while creating this album?

I listened a lot! I should text you my reading list, in fact I made a reading list just for this question. [At this point, Lange sends a Spotify playlist entitled “FAR IN ~ Music,” populated with songs by the likes of everyone from Jerry Paper to Prince to Priscilla Ermel.] One of the records that I really like there is a record by María Márquez called Echoes. She’s a Venezuelan artist, and she did it in collaboration with Frank Harris.

What I love is that the sounds are all those crossover sounds from the ’80s – digital pianos and synthesizers and drum machines. It’s all of those familiar sounds you’d hear from pop songs from this era, but they put them together in such a unique way and in their own world. And some of those sounds are kind of associated with things that are kind of like, I don’t know what a good word for that, but stuff that isn’t cool. I like it because they are not ironic. They were creative and used the things they had with them. It’s not one of those really famous records. I like people who are always trying to find things that are best available to them.

You have a sort of cosmic, psychedelic quality in your music, and songs like “Mirror Talk” on the record are incredibly spectral. Do you appeal to anything in the spiritual realm when you create?

I think this whole record is very spiritual. And I think the greatest spiritual connection I had on this record was when we were in Marfa, just having connections to the planet and being in these spaces. I had a new connection and a new connection with nature itself. There was confinement, [and] just knowing that all we have is this outdoor space and it’s so fragile, I just enjoyed it more. And as for “Mirror Talk”, it was actually part of the group of songs that I recorded in 2018, the week I was finishing. This is how you smile. So, it was very specific to the feeling of not wanting to make music like that last album and wanting to enter a different world with it. It’s my favorite song [on the album.]

I know your culture is present in all of your music. How did you specifically infuse your culture and experiences into this particular record?

When I was little, the first time I went to Ecuador was in 1988. I took a screenshot of my face from one of those home videos from that first trip in ’88, and this is the cover of the album. This [trip] was a great moment for me because it changed my view of the world. I didn’t know what the world was like until I was there, and I was like, “Whoa, this is such a foreign place to me.” He just completely reprogrammed my head. Just seeing the mountains, the culture and the people, and learning more about where my family came from. This has really done quite a bit on me.