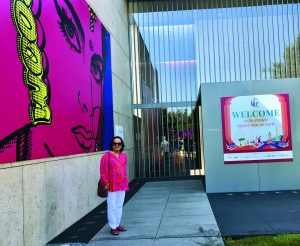 Inprint’s mission is to inspire readers and writers in Houston and beyond. Since the organization’s inception, Inprint has provided more than $4 million in scholarships and awards to emerging authors.

The University of Houston is the largest public research university in Houston and the third largest university in Texas, offering undergraduate, graduate, and doctoral programs. UH is recognized as an R1 institution by the Carnegie Foundation for its high level of research activity and is home to a Phi Beta Kappa chapter.

India House’s mission is to unite cultures, build bridges and help the community by bringing Indian resources, education, services and culture to Houstonians.

Community support programs include a bi-monthly free food distribution through which we serve 400 families each month, a charity volunteer clinic every Saturday treating approximately 350 people each year, free consultations on family law and immigration law and free relationship coaching for individuals and families.

Author Chitra Divakaruni spoke about the “life of the writer” with Ragini Tharoor Srinivasan, a professor at Rice University.

Author Mani Suri’s latest book is The Big Bang of Numbers: How to Build the Universe using Only Math.

Pondicheri Restaurant offers the intricacies of Indian cuisine with leanings towards the ancient body of wisdom of Ayurveda, the magic of spices and the goodness of fresh, local ingredients. The cookbook Masala: Recipes from India, the Land of Spices by award-winning chef Anita Jaisinghani is an ode to India’s rich culinary history. Chef Anita Jaisinghani – founder of the famous Pondicheri restaurant in Houston – paid tribute to the wisdom and techniques
Indian cuisine during a session that evoked food, memory and a kitchen tray. She was in conversation with festival producer Sanjoy K Roy.

The festival also featured a music and commemoration session with scholar, historian, writer and classical singer Dr. Reba Som. Dr. Som took the audience on a melodic journey through the life of Vivekananda and also talked about one of his dearest disciples, Margaret Noble, known to the world as Sister Nivedita. Chief disciple of the 19th century Indian mystic Ramakrishna, Swami Vivekananda’s groundbreaking speech to the World Parliament of Religions in 1893 introduced Hinduism to America.

Author Varsha Bajaj’s recent book Thirst is a poignant take on class, wealth and equity around water disparity in suburban Mumbai, India. In a conversation with writer and civic leader Andrea White, Bajaj discussed asymmetric patterns of resource access in a parched world. This was a session spanning continents, looking at the impacts of climate change and the misuse of water.