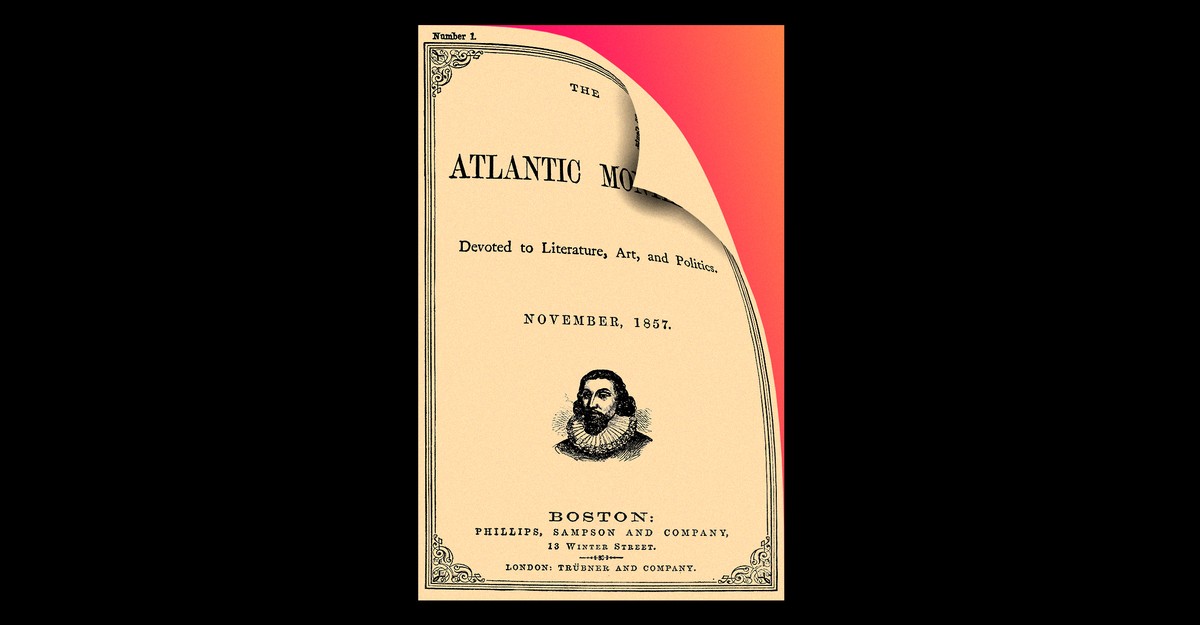 In the summer of 1860, Harvard botanist Asa Gray published in Atlantic a benevolent, if hesitant, defense of Darwin’s “On the Origin of Species”, which then caused anxiety among theologians and scientists.

“Darwinian theory, once it has gained a foothold,” wrote Gray, “boldly advances, follows the so-called near ancestors of our present species farther and still farther into the dark past, and ends in an analogical inference that ‘brings the whole world together.'”

Geologist Louis Agassiz, Gray’s colleague at Harvard and, quite early, Atlantic colleague as well (the magazine’s bear at the time more or less coincided with the list of Harvard professors) – then publicly denounced Darwin. Gray and Agassiz would debate natural selection over the next decade. Atlantic published Agassiz’s anti-Darwin manifesto, “Evolution and the Permanence of Type,” in January 1874, a month after the geologist’s death. “His concise and effective sentences, writes Agassiz, have the weight of aphorisms and pass… for principles, whereas they can only be affirmations without foundation. Such is “survival of the fittest”.

Agassiz lost his debate with Gray, of course, and he would also lose his reputation (he had an unfortunate tendency to push theories of racial supremacy and creationism). Gray, who was open to novelty, is, in my opinion, more interested Atlantic type than Agassiz, even though Agassiz has contributed tens of thousands of words to our magazine, mostly on rock-related topics.

Here’s one of my favorite passages from Gray’s terrifying review – my favorite despite (or perhaps because of) its black hole-density construction:

That is why, in the days of Galileo, we could have helped proscribe or burn if he had been stubborn enough to justify cremation – even the great pioneer of inductive research; though when we had regained our composure and had quietly discussed the matter, we might have concluded that the new doctrine was better than the old, after all, at least for those who had nothing to unlearn .

Excogity! Just imagine a Atlantic writer tries today to slip a word like that in front of our vigilant proofreaders! The argument embedded in this passage, however—the importance of maintaining intellectual and analytical composure in the face of emotion, obscurantist belief, public pressure, and recalcitrant tradition—represents our magazine at its best.

One of my great joys as a journalist here is digging through our physical archives for treasures like Asa Gray’s review. And it has been a particular frustration for me not to be able to share the joy with our readers. It is therefore a great pleasure to let you know that we have finally achieved our complete archive, representing 165 years of Atlantic journalism—available online. Nearly 30,000 articles, reviews, short stories and poems, published between Atlantic‘s in 1857 and 1995, the year we launched our website (a site that included, from the start, articles from both print and web), are now accessible to subscribers, researchers, students, historians, and that blessed category, the incurably curious.

“The world is made up of all doors, all opportunities,” said Ralph Waldo Emerson, one of our founders, and the doors to our magazine’s rich past are now open.

I hope our readers will feel the same wonder I felt when I learned that The king and methe Rodgers and Hammerstein musical, was born in the pages of Atlantic, in the form of a memoir by Anna Leonowens, who taught the 39 wives and concubines of the Siamese King Mongkut, as well as his 82 children. Or when I discovered Felix Frankfurter’s defense of Sacco and Vanzetti, or the continuing argument between Booker T. Washington and WEB Du Bois over the methodology of black liberation, or Mark Twain’s first impressions of the telephone, or one of Hemingway’s earliest short stories, or Rachel Carson’s first foray into nature writing, or Sylvia Plath’s best poems, or Robert Frost’s “The Road Not Taken” (yes, first published in Atlantic).

You will find, as you explore the archives, luminous, limpid and polyphonic prose, but I must warn you that you will also find opaque and unintelligible prose, as well as a good number of writers who deserve their obscurity. You will certainly find writers who have used 15 words when one or two would have sufficed. You will read imperishable poetry, and also eminently perishable poetry. It’s all there: the good, the bad, the brilliant, the offensive, the ridiculous. We knew from the start that we would not engage in any censorship, cuts or dodges. So you will also find in the archives eugenics sympathizers and people who today would rightly be called racists, misogynists, imperialists and anti-Semites (for example, I framed on my wall the cover of our January 1939 issue, which featured a story titled “I Married a Jew”, written by – wait for it – “Anonymous”, a German-American woman who wrote: “I often find myself trying to see things from the point of view of the Nazis and to make excuses for the things they do – much to the dismay of our liberal-minded friends and the hurt confusion of my husband.”) As journalists, we felt that it was important to share our archives in their entirety, for reasons of transparency and historical accuracy.

To help our readers start exploring the millions of words we’ve just uploaded to the web, we’re launching a special project highlighting 25 writers from our past, with essays written by contemporary authors. Atlantic writers. These star writers include one of the two greatest figures in 19th century American life, Frederick Douglass, as well as Helen Keller, Harriet Beecher Stowe, Henry David Thoreau, Raymond Chandler and John Muir. And we will continue to add new writers, as the Atlantic bench has infinite depth.

There is a universe of interest in our archives. Please explore!