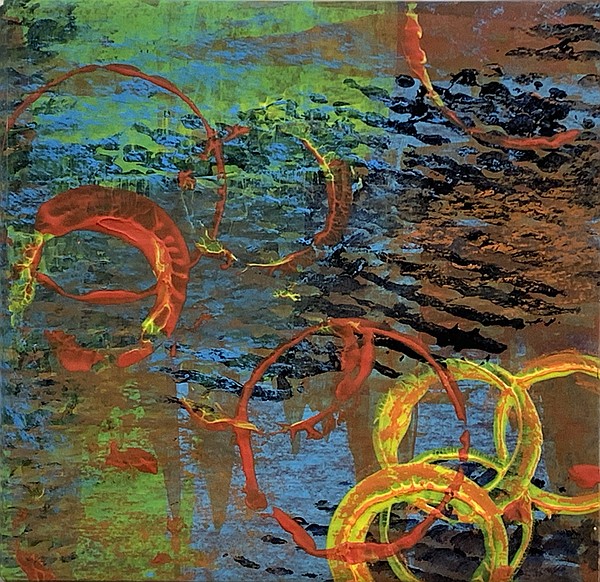 The South Arkansas Arts Center is hosting local artists Kelly Campbell and Julia Slaughter and their exhibition “Stolen Moments” at the Lobby Gallery from October 3 through November 1. There will be an artists’ reception on Thursday, October 6 from 5:30 to 7:00 p.m.

With the exception of “Roughnecks & Roustabouts” in 2017, much of Kelly Campbell’s previous work was inspired by travel. in Rankin, Texas, she also lived in Abbeville, Louisiana before her family moved briefly to Smackover, then eventually to Norphlet, Arkansas when she was six years old.

She traveled to all three US coasts, Canada, states west of the Mississippi River (except Minnesota and Iowas), and states south of the Mason Dixon line. As an adult, Kelly traveled to Grand Cayman, Jamaica, Honduras, Belize and Cozumel, where she visited Tulum and saw the ancient Mayan ruins. She spent nine days at Burning Man in 2011 and again in 2012. For her 60th birthday, she spent a week in the Florida Keys, where she had never been before,

Julia Slaughter grew up in the North West where she enjoyed outdoor sports all year round. From an early age, she enjoyed artistic projects and drawing. In elementary school, she won a prize for a watercolor depicting a cougar resting in a tree. The painting was stolen from the scene, and because of this heartbreaking incident, she swore to paint only for fun and enjoyment. At fifteen, Julia spotted the most handsome young man with dark hair (perfectly done!) in a purple and white letter jacket and button-fly Levi 401 jeans walking down one of the main streets of his hometown. . The two dated throughout high school, during which his painting was limited to “Go, Team, Go!” signs and work on backdrops for school dances.

A year older than Julia, Boyfriend left for college, clearly focused on earning a degree in chemical engineering. Her journey became clearer in her senior year after she was knocked out in the second game of a powder puff football game, when she was forced out of her position as nose guard and sadly realized that sports professionals were not in his future. She enrolled in college the following fall as an art major where she studied metalwork, pottery, and figure drawing. After graduating, realizing he would never have the chance to meet, let alone woo, Stevie Nicks or Olivia Newton-John, Chuck married Julia.

Five kids kept them busy for years, and when the parenting chores dwindled, they decided to find a common activity, so they picked up paintbrushes. Chuck began working on the exterior of the house, Julia on paper and canvas. Both considered themselves autodidacts in their respective fields.

Kelly and Julia became friends fifteen years ago when they both served on the visual arts committee. Both have had solo shows at SAAC, and this is their second (and final) collaborative effort.

For more information about the “Stolen Moments” exhibit at the South Arkansas Arts Center, please call the SAAC office at 870-862-5474 or visit the website at www.saac-arts.org. SAAC is located at 110 East Fifth Street, El Dorado, Arkansas.