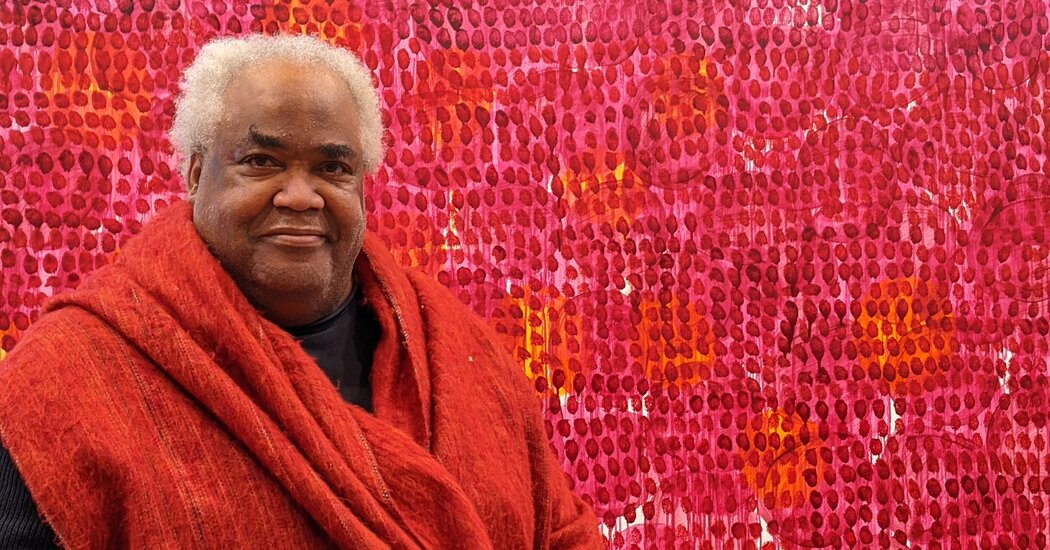 Peter Williams, who painted the black experience, dies at 69

Peter Williams, whose colorful paintings – sometimes humorous, sometimes disturbing, often both – reflected his own history, black history and contemporary issues like police brutality and mass incarceration, died August 19 in Wilmington , in the Del. He was 69 years old.

His wife, Elishka Vitanovska Mayer, said the cause was a heart attack.

Mr Williams first exhibited as a teenager – he offered paintings for sale at the 1969 Woodstock Music Festival – and has been prolific for half a century. Its production was vast and constantly evolving. Some of his works were abstract, others figurative; some represented an inner monologue in which he sought to define his own identity; some have spoken directly and bluntly about the news.

In recent years, he has drawn attention to several series inspired by the high-profile police murders of blacks – a group of paintings, heavy in blue tones, invoking the death of Michael Brown in Ferguson, Missouri, in 2014; a triptych on George Floyd, killed in Minneapolis in 2020; and more.

Other recent series have been devoted to mass incarceration and Colin Kaepernick, the former NFL quarterback and social justice activist. A group of paintings made from 2015 to 2017, also inspired by black murders, featured a black superhero named N-Word. Dressed in yellow and red and using the American flag as a cape, he comes to scenes – some gruesome, others almost comical – where black people need help.

“I kind of tie it back to the ’70s exploitation noir films,” Williams told Michigan Radio in 2016, explaining the idea behind his superhero. “Usually the hero of some of these movies was a thug or a pimp or someone who wasn’t as respected, but in the end he came out on top for his community.”

Another series, “Black Exodus” (2019-20), felt that the planet had become irrecoverable through oppression and environmental degradation caused by white culture – it depicted Afro-Futurists’ escaping in old cars modified for space travel.

“At this point, there was no point in going back to Africa,” he explained in a lecture from a Zoom artist this year, “because there might not be a planet Earth”.

Some whites took offense at the images of Mr. Williams – he sometimes described the police as pigs, for example. Some blacks also found things in his paintings to dislike, among them his use of minstrels or the figure of Aunt Jemima in certain works, which they believed to perpetuate racial stereotypes.

“Williams has a knack for irritating the viewer, but he does it in style,” Joy Hakanson Colby wrote in 2006 in The Detroit News, when Mr. Williams had a show in Ferndale, Michigan. “One thing is for sure: it is never boring.”

Mr Williams, who lived in Wilmington and was represented by Luis De Jesus Los Angeles Gallery, said his strong images reflected as much personal research as any political statement.

“It surprises me that people are put off by my job,” he told the Detroit Free Press in 2002. “It’s not just about race, but how I struggle to find it. my place in my family and my community. “

Sometimes one of his paintings included a black male figure, sometimes naked, with an artificial leg. It was a representation of Mr. Williams himself.

In 1972, while a student at the University of New Mexico, he was a passenger in a high-speed car that plunged over a 250-foot cliff near Albuquerque. He lost his right leg above the knee. His wife said he was in the hospital for seven months.

“Her life,” she said via email, “has been a lesson in self-discipline and willpower.”

Peter Beresford Williams was born on March 18, 1952 in Suffern, NY, in Rockland County, to Goldburn Beresford Williams and Jacqueline Lucille (Banks) Williams. He grew up in the village of Nyack on the Hudson River, where his father was a real estate developer. Peter Williams later admitted that given the region’s relative racial diversity, it took him some time to understand the struggles black people face elsewhere in the country.

He completed his work on his bachelor’s degree in 1975 at the Minneapolis College of Art and Design and received a master’s degree from the Maryland Institute College of Art in 1987. That year he accepted a post of associate professor at Wayne State University in Detroit; this movement, he said, helped deepen his understanding of urban racial tensions, giving him a close-up view of what he called “a hard life of poverty and its racist infrastructure”.

Mr. Williams moved to the University of Delaware in 2004 and was scheduled to retire this month.

While at Wayne State he spent time in Spain and many of his works show the influence of Goya and other Spanish masters, although he also drew on traditional African imagery and culture. pop. The Free Press described his work as “Salvador Dalí meets Walt Disney”.

The juxtapositions in his work could be jarring.

When Mr. Williams presented an exhibit at the New Jersey Visual Arts Center at Summit in 2007, Thomas Micchelli wrote in The Brooklyn Rail: Like rubbish scraped from tangled grass from a wasteland strewn with bricks stinking of dead cats.

Julie L. McGee organized this exhibition and later became a colleague at the University of Delaware.

“Peter Williams was a fearless artist,” she said via email. “Her combination of acerbic wit, social commentary and beauty has made her work appealing to and transcend the momentary.

Besides his wife, Mr. Williams is survived by two step-sons, Paul and Daniel Mayer.

“Williams conveyed the pain with exuberant colors, patterns and geometry,” she said. “We dare not and cannot look away.”