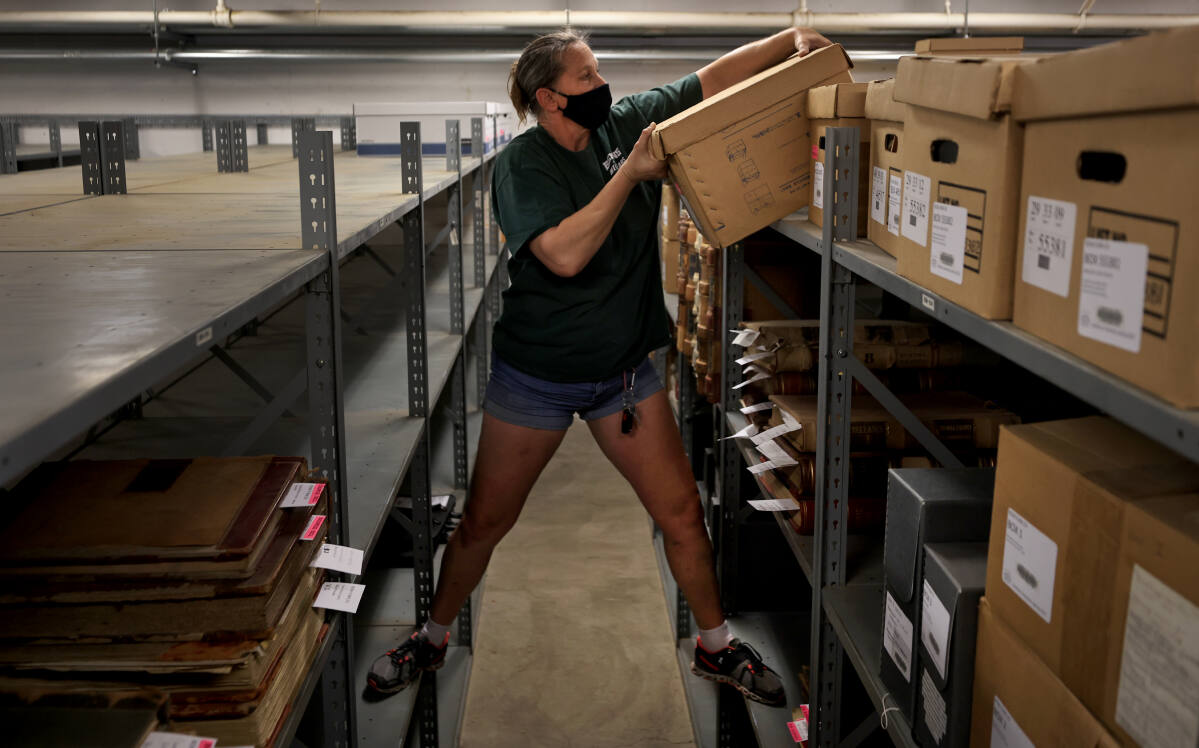 The move of what Supervisor Susan Gorin has called a “treasure trove” of irreplaceable documents currently stored in a dilapidated building in the Sonoma Valley began last week and is expected to be completed by the end of the month.

“We are trying to do it as quickly as possible,” said Ann Hammond, director of the county library. “Saving these materials from the path of fire has been a priority for the library, and I am happy to see this important step underway.”

The Archives, a relatively obscure county resource with a devoted audience among those who study and appreciate history, have been housed in some nondescript, unnumbered building in the middle of the vast Los Guilicos County government complex off the coast of the Highway 12 east of Santa Rosa.

The 3,800 square foot structure built in the 1950s, with a concrete floor and a leaking metal roof, barely escaped damage from the Sisters’ fire which approached 440 feet in 2017 and to a heartbreaking repeat of the Glass fire that got even closer in September, causing $ 8 million in damage to the Los Guilicos site, which includes the county’s Juvenile Justice Center.

Dead and blackened trees by fire dot the slopes of the Mayacamas Mountains behind the resort.

The warehouse, which was once part of the kitchen of the Los Guilicos School for Delinquent Girls, has kept over 40,000 historical photographs, deeds and mortgages, voter registration, business licenses, deeds of adoption from 1927 to 1945, four boxes of hospital records from the 1930s and 1940s, and much more.

“You have to be very careful with these,” said one of his crew.

Serna, whose company was hired to transport the neatly packaged items, said he intends to meet the library’s Aug.31 deadline. “We are working on it,” he said. “We will get it.”

The company transports its precious cargo in 26-foot box trucks to temporary storage in a rented building from the Sonoma County Farm Bureau on Westwind Boulevard near the county airport.

Hammond said the temporary location provides security for the archives, while the library, a separate government agency funded by taxes and county supervisors, determine permanent space for about 5,000 cubic feet of documents.

Supervisors put in $ 140,000 to lease the Farm Bureau site for two years, which can be extended, Hammond said, and the Library Commission paid $ 137,000 for an inventory of the documents, packing, moving and retrieval. reconfiguration of the new space.

Gorin, whose district includes the archives, and Deborah Doyle, the chair of the library committee, both said in April that the move was urgent.

“Urgency is the word I would use,” Gorin said.

Leaders of a citizens’ group pushing for the relocation of the archives said they were “overjoyed at the news” of the move.

The temporary installation is “an important first step in preserving one of Sonoma County’s most unique and valuable archival collections,” said Katherine Rinehart and Lynn Downey, Co-Chairs of Advocates for the Sonoma County Archives, in an email.

Claiming that “more people than ever” now know the importance of preserving the records, they said a permanent archive center “must be part of the county’s plan for a new administrative center.”

Rhinehart is a retired County Library official and Downey is a Western historian and consulting archivist who has worked in the County Archives.

Old records – valued by researchers, historians, genealogists and lawyers – will be inaccessible for about eight weeks while they are moved and then stored in the temporary facility.

When this is done, the public will again be able to request archival materials and view them by appointment at the Downtown Santa Rosa History and Genealogy Library, adjacent to the Santa Rosa Central Library in the Third and E. streets

The archives themselves are closed to the public.